December 29, 1972.  Eastern Air Lines Flight 401 crashed into the Florida Everglades, killing 101 passengers.  That crash was the first ever of a wide-body aircraft and one of the most horrific airline crashes in the history of the United States.  So, what happened?

After an intense investigation, analyzing the components of the aircraft, the researchers were shocked to discover that all the vital functions and parts of the plane were in perfect working condition.  This discovery led to a deeper question.  What exactly went wrong?

The Lockheed jet was preparing to land when the first officer Albert Stockstill noticed that the landing gear indicator light, was not lighting up.  This particular little green light was designed to signal that the nose gear was locked down.  Even though the light wasn’t working properly, the nose was locked.   In other words, the problem was the indicator light, not the actual gear function.

While the officers were intensely focused on the gear indicator, they failed to notice that the autopilot had had been deactivated until it was too late.

Here is an excerpt from the Aviation Safety Network (http://aviation-safety.net/database/record.php?id=19721229-0):

“The failure of the fight crew to monitor the flight instruments during the final 4 minutes of flight, and to detect an unexpected descent soon enough to prevent impact with the ground. Preoccupation with a malfunction of the nose landing gear position indicating system distracted the crew’s attention from the instruments and allowed the descent to go unnoticed.”

Long story short, the nose gear did not cause the crash.  The officers losing sight of the altitude of the plane caused the disaster.

I see it over and over again. So many of us get caught up in unimportant email responses and social media scrolling.  Or worse, we get on the web to discover one thing and an hour later we can’t figure out how we ended up on the web-page we found.  Like the crew on Eastern Airlines Flight 401, we get distracted. 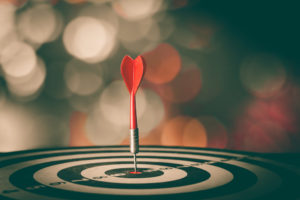 Make a list of what really matters to you.  Define your target by identifying what ismost important and eliminate all other distractions.